There is near-on unlimited potential for traditional climbing. First ascents, wild experiences. All there, for the taking. Courage (at least a dollop of it) is mandatory, suffering inevitable, adventure guaranteed.

The kayaking too, isn’t terrible. In 2010, my friend Andrew and I took the ferry from Melbourne to Devonport before paddling back across Bass Strait in a double sea kayak. 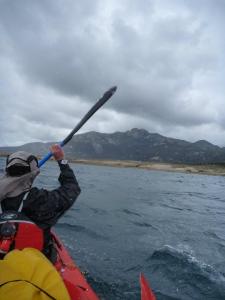 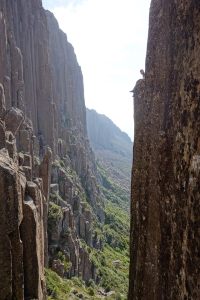 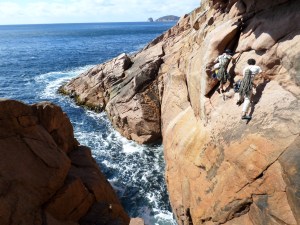 Ben and Johannes soloing a cruxy bit on the Sea Level Traverse. We roped up on two short steep sections but soloing is a much easier (and safe) way to do this climb.

On a steeper section of the Sea Level Traverse 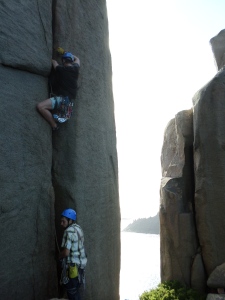 Wondering why I forgot my pants on the FA of Ijtihad (5.10+), a new hideous offwidth

I named Ijtihad (5.10+), for the Arabic word meaning “diligence” which, in Islamic jurisprudence, pertains to “the utmost effort an individual can put forth in an activity”. The Arabic root of the word “j-h-d” (the triliteral is جهد for those of you playing at home) is the same root as the word “jihad” which means “struggle”, “purification of the self” or “blow myself up in a cafe” – depending on who you ask. I was proud of my “utmost effort”. After all, I had grovelled up it and – over-estimating my offwidth abilities – hadn’t nearly taken enough big cams. I felt the name “ijtihad” justified.

From the top of the Moiai, encircled by a vortex of sea wind, the exposure is total. The cracks wind on – effortless handjams. Below, the ocean rages, the swell sidewinding into the rocks – crashing, frothing, broiling.

Tasmania. All in all, it’s worth a look.

Cape Raoul in all her glory. The Southern Ocean beyond.