This morning, Ashley Dyball, an Australian foreign fighter assigned to rear echelon duties with the YPG, touched down in Melbourne airport to cheers from ecstatic friends and family and ululating from the Australian Kurdish community.

For some months, it seems, Mr Dyball has been party to the conflict in the Northeast Syria, having taken up arms with the Kurdish YPG in their battle against ISIS for a free Kurdistan. He went with no military training and no prior knowledge of the region and returned with a suitcase full of keffiyeh and an iPhone-full of #warselfies. Lawrence of Australia has returned from Rojava. 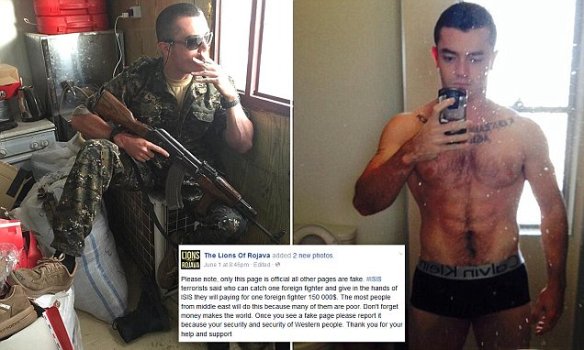 Once a benchpress champion, now a stone-cold badass. Mr Dyball is noteworthy for his simultaneous wearing of two keffiyeh (one worn around the neck and one tucked into his underpants).

Elsewhere and under the eyes of the law, it seems that Mr Dyball’s overseas adventure saw him in contravention of the recently-passed Foreign Fighters bill which has it down as an offence to partake in hostilities in a “declared area”. Inevitably, there will be calls for amnesty – given who he was fighting with (the Kurds) and who he was fighting against (ISIS). But though the laws of the land should reflect what is morally right, there will remain, as ever, a distinction between “what is good” and “what is lawful”.

If someone breaks into my house and kills my entire family, for example, it might be understandable for me to seek vengeance by killing that person right back. The law however must see things differently. Leniency might be granted during my sentencing (given the circumstances) but I should still go to jail for murder. Why? Because our society has moved beyond “an eye for an eye” as a cornerstone in our justice system.

Equally, even though Ashley Dyball was engaged in a war effort against a very tangible evil (ISIS), the recently-passed Foreign Fighters bill has made possible “the prosecution of people who intentionally enter an area in a foreign State where they know, or should know, that the Australian Government has determined that terrorist organisations are engaging in hostile activities and the person is not able to demonstrate a sole legitimate reason for entering, or remaining in, the foreign State”.***

The so-called Lions of Rojava might not be a proscribed organisation, but the PKK, alongside whom they fight, are. The Kurds might be one of the few reasonably-palatable allies we have in “Syraq” but they still commit atrocities – they still employ suicide bombers and post gruesome images to social media. One of these slaughters, during the Tel Hamis offensive, was committed in my dead friend’s name. There is every indication that the YPG and the rest of the Kurdish militias are the lesser of all the evils in the Middle East but regardless, these are still violent non-state actors with serious shortcomings in the domain of human rights. Taking up arms alongside any party in the Syrian conflict should be and is an offence unless that person is in an Australian Army uniform with an Australian Army-issued rifle doing what the Australian government told them to do.

Mr Dyball’s parents have indicated that the laws were unclear when Ashley Dyball pranced off to Syria. Regardless of the actual date these laws were passed it is ridiculous to argue that he was unaware of his actions being in a legally-grey area. Did he even bother to check what international law already said about “mercenaries” for example? I for one, know that Ash Johnston, while in Syria, was very concerned about the consequences he might face should he return home – and this even in the natal stages of the Foreign Fighter bill debate.

Finally, there is the issue of setting a legal precedent. If the Australian legal system lets this one slide what does that say about our tolerance for people who would travel overseas to become foreign fighters? Draw the line now and anyone crossing it will be punished. Deterrence. Punitive redress. This is how the issue will be resolved.

It will, quite rightly, be argued that I am just another keyboard warrior, pontificating about a Syrian reality in which I have not taken part. Mr Dyball, unlike me, was witness to the atrocities of ISIS. Mr Dyball saw, firsthand, the suffering of the Kurdish people and, unlike me, decided to do something about it. Mr Dyball, unlike me, was there. But this is exactly the point. Regardless of whether Mr Dyball was fighting on the side of good or of evil (if we are to incorporate this Manichean dichotomy into our worldview), Mr Dyball was there when he should not have been. According to law.

Mr Dyball, to borrow a phrase from an abusive Army corporal I once had yell at me, “signed his name on that dotted line”. No one forced him to go to Syria. Choices and consequences. Now it’s time for Mr Dyball to face the consequences. In the meantime, at least he’s gotten rid of that terrible Nike bumbag.

En route to Syria… via Paris

Ashley Dyball reunited with his parents in Melbourne airport

*** Correction: a colleague informed me that Mr Dyball is unlikely to be charged under the above-mentioned clause since the Foreign Minister Julie Bishop only announced declared areas in Raqqa and Mosul (presumably to specifically target foreign fighters with ISIS). If we take the Jamie Williams case as a model for future legal proceedings it seems more likely that Mr Dyball would be charged for “preparing for incursions into foreign countries for the purpose of engaging in hostile activities” or a similar, more general, offence under anti-terror legislation. But I’ll leave the ins-and-outs to the DPP. Thanks for the correction mate.

3 thoughts on “Ashley Dyball Should Do Time”