As one of the most bizarre presidential campaigns in the history of the United States nears its conclusion, it seems difficult to imagine that Donald Trump could emerge victorious in November. Too many key constituencies have been alienated. Too many vilified minorities – voiceless by themselves but vociferous as a collective – have turned their backs on the demagogue. One poll reported that minority voters have a more favourable view of the bubonic plague and middle airplane seats than a Trump presidency.

That said, even as Trump’s campaign seems to be collapsing around him, it is important to acknowledge that the political movement which catapulted “The Donald” from his job as a plug on a reality TV show with declining ratings to front and centre of American political discourse is far bigger than the man himself. Indeed, more than anything else, Donald Trump’s rise is better understood not as the outcome of a shrewdly-run campaign but as a symptom of an ideological trend (one that is not entirely novel) which is sweeping the Western world – a phenomenon we might label “the new nativism”.

Concisely put, nativism emphasises the primacy of “natives” over “non-natives”,  whereby special privilege is given to existing inhabitants over newcomers. The term “native” of course, is an ontological distinction which attaches a certain person to a certain place so at the core of the nativist struggle is an entire cosmology of place which applauds the walling off of local terrain to defend the native ethnie.  Because of its hyper-locality, nativism tends to manifest in hyper-local forms and this is no different in the West today with the return of Hansonism to Australia; the Brexit vote in the UK; the Le Pen movement in France; and of course, the enthusiasm for everything Trump which has swept across Republican America.

United by a shared dislike for non-natives (particularly Muslim non-natives), the anti-foreigner sentiment of these movements has caused them to be viewed as movements of “rejection” or negation – where “nativism” is simply a technical term for “anti-immigration”. But while it is usually true that nativists are anti-immigration, nativism shares more similarities with nationalism in that its discourse is framed first and foremost around an exuberance for an imagined community – “the nation” – whose cultural identity it seeks to preserve and promote. The Other is disliked, yes, but He is not the focus. Hate in the case of nativism, is simply a by-product of the manufacturing process.

Where nationalists seek to couple the mythology of the nation with the apparatus of the state in order to project power abroad, nativist discourse is usually framed in defensive terms (hence its frequent description as an “anti-position”), often laced with nostalgia for a lost but reclaimable past. Fears of immigrants “stealing jobs” result in calls to build walls and “make America great again”; concerns about “the Islamisation of the secular West” divert attention to cultural minutiae like religious food certification; and observable changes in local demography create a reminiscent longing for, in the words of Pauline Hanson, “a breed of Australians who were taught values, morals, honesty, work ethic and common sense – things very much lacking today”.

The tension between the “in-group” and the “out-group” is thus at the core of the nativist project, and the cultural field in which nativism thrives is therefore best embodied by the gated cul-de-sac – exclusive, manicured and insular – where neighbours band together in their quest for cultural sameness.

Not much in the new nativism is entirely new to humanity. Humans are territorial animals, traditionally banding together in small groups to pool and control access to limited resources. Early humans sought to secure their lands and goods by constructing socio-political units called “tribes” – communities of like-minded “selves” defined by relationships of kinship and affinity. With that said then, if early nativist thinking emerged from this primordial mould  what is “new” at all in “new nativism”?

The answer, conveniently enough, lies in one word – globalisation.

With the acceleration of chaotic globalizing forces defined by what the anthropologist Arjun Appadurai calls “trajectories of disjuncture”, traditional structures of power buttressed by ideas of nationhood are being challenged like never before. In a world where oceans can be crossed in less than a day and information can be transmitted instantaneously, goods manufactured overseas transform into “flows” breaking down economic barriers while foreign peoples and ideas become “vectors” destabilizing extant notions of ethnic purity and traditional patterns of thought.

In the midst of all this perceived chaos, bids to reclaim the stronger ethnic identities of the past become more desperate, building momentum until rational concerns morph into widespread anxiety and anxiety manifests as fear. In this climate, anxiety amongst the majority translates into “fear of small numbers”. “Vectors” must be immunised against. “Flows” must be stopped by building walls against them. One study conducted by Essential polling suggested that 49% of Australians support a ban on Muslim immigration even though another study conducted in the US found that the chance of dying in a terrorist attack caused by a refugee is 1 in 3.64 billion (lower for an illegal alien).

Naturally, the miscomprehension of real versus perceived risk impels some like Thomas Friedman to opine that Trump’s supporters “are not interested in Trump’s details… They like his gut” or others to claim that those unfairly left behind by globalisation are living in “a post-fact world” where unequal globals forces are actually just “dimly understood”.

It should be obvious that this is not the way to engage with the many shortcomings of new nativism, even though much of what it represents is extremely unpalatable. As Peter Lewis wrote on the results of the Muslim immigration poll: “this is not a ‘basket of deplorables’ who sit outside the confines of polite society… [it] is 49% of the men and women who make up our nation”.

Indeed, the best way to grapple with the poorly-thought-out policy proposals of the new nativists is not to say, for example, that what Australia needs is more Muslims (even though, all things being just, this shouldn’t matter one iota) – it is to simply point out that it would be impossible and unconstitutional for border officials to run a test of a newcomer’s “Muslimness” at Australia’s ports of entry.

Similarly, Pauline Hanson’s totalitarian proposal to put surveillance cameras in every mosque across Australia cannot be countered by denying that there is such a thing as Islamist extremism – it can only be countered by explaining that overtly targeting religious minorities is likely to make the problem of religious extremism worse.

A multi-million dollar royal commission to confirm “whether Islam is a religion or a political ideology” would be excessive and wasteful because neither “Islam” nor “Islamism” are monolithic systems of ideation (meaning that they are difficult to put in simple, elegant boxes). Nor would any commonly-accepted definition of Islam characterise it as anything other than an engagement with the “sacred” – the most elementary component of a religion.

The list of bad nativist policy to refute goes on and on. An overly-combative, largely-symbolic and easily-breached wall along the US-Mexico border is not what US customs officials have asked for in appropriation documents – a “virtual wall” of sensors and drones is. Efforts to reclaim a lost “British-ness” in the wake of Brexit would be fruitless because there is no consensus on what being British actually consists of. Burqas cannot be banned without also banning masks, balaclavas and the full-body costumes one sees at electronic dance music festivals.

To many reading this, even giving the time of day to respond to some of the concerns of the new nativists might seem like a wilful acknowledgement of the mad ravings of a racist fringe. One thing is certain, however – ignoring the other side in a debate is neither a good way to win an argument nor a way to constructively engage with and allay the other’s concerns.

What is true is that the main challenge for modern democratic societies in the future will be to manage the tension between the identity-building projects of threatened ethnies and the unavoidable realities of a hyper-connected, culturally-homogenous world. This tension must be managed through balanced discourse free of name-calling and with sound policy free of mania. Failing to manage this tension could be disastrous. As the political scientist Benjamin Barber wrote in his influential treatise Jihad vs McWorld – “the two axial principles of our age—tribalism and globalism—clash at every point except one: they may both be threatening to democracy”. 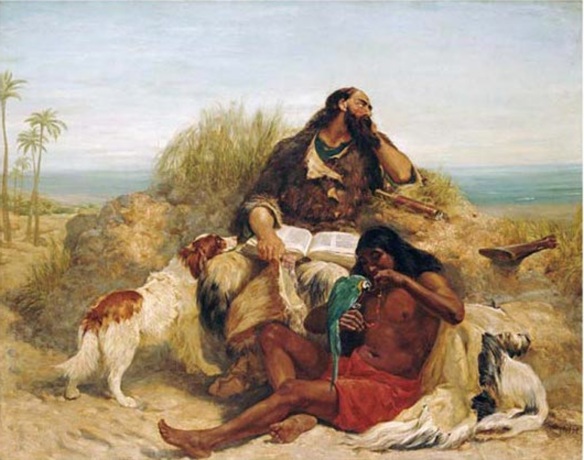 Friday, the native, and Crusoe

1 thought on “On the New Nativism”