A version of this article was published in the Winter/Spring 2017 edition of Mountain Life. 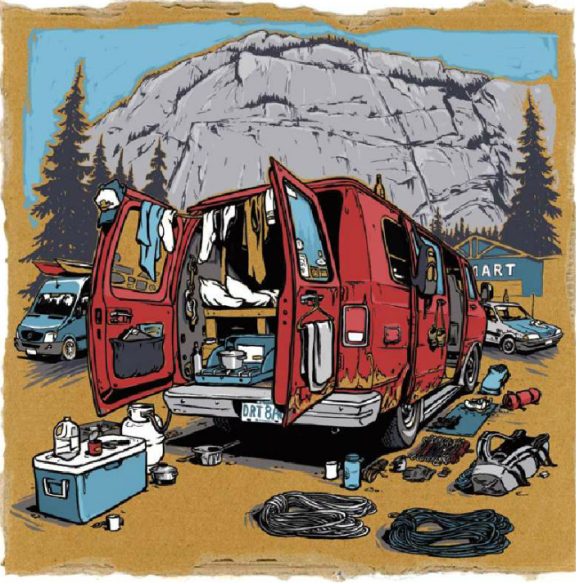 Beggars do not work, it is said; but, then, what is work? A navvy works by swinging a pick. An accountant works by adding up figures. A beggar works by standing out of doors in all weathers and getting varicose veins, chronic bronchitis, etc. It is a trade like any other; quite useless, of course–but, then, many reputable trades are quite useless…” – George Orwell

We spent the first year and a half of our life in the Sea to Sky corridor sleeping in the back of a rusty red work van with the words “Ville de Montréal” tacked on the side. We’d driven the van from Québec across the continental US (where gas was cheaper), arriving finally in Squamish – the outdoor capital of Canada.

Of course, I say “sleeping” in the back of the van because all of our living was being done outside of it – climbing, hiking and skiing. Anyway, on day three in town, after we’d made some mandatory repairs to our ailing vehicle, my girlfriend Eleanor tallied up the finances and discovered that we had eighty-three dollars between us. Eleanor had lined up a cash job at a dog kennel so we figured – with a splash of cautious optimism – that the receipt of a paycheque was feasible within two weeks. This left us, if we divided eighty-three by fourteen, with a per diem of five loons and ninety-two cents. A share-sized pepperoni pizza from Little Caesar’s cost $5.85 which left seven cents a day for whatever our hearts desired.

The point is we were poor. Which didn’t matter because we were happy. Although, to be fair, if we were a little less poor it’s not unreasonable to think that we might have been a little more happy.

In the meantime, we parked out front of the Walmart to access wifi and since we also frequently stayed there for the night, we listed that lot as our address when we switched over to British Columbia driver’s licenses. It was also a good place for the essentials – ramen, oatmeal and energy bars – because even when you live under the breadline you still have to line up for your bread.

We were, in the colourful parlance of the outdoors, a couple of “dirtbags” – living a life divided almost exclusively between Walmart, work, and the walls of the Stawamus Chief – the great totem-like stone around which the climber configures his existence. 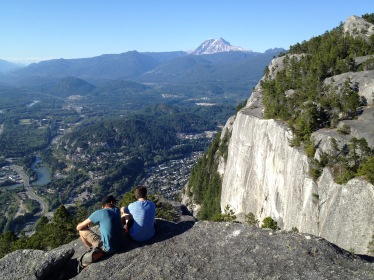 The “dirtbag” of course, is less a species of outdoorsman and more a genus of outdoorsman – an umbrella term which describes a variety of different types of people who prioritise experience over possessions and adventure over stability. For example, during the summer, the dirtbag scene in the parking lot of the Stawamus Chief can be subdivided into three different social strata.

At the top of the dirtbag pyramid (and the closest this world gets to an aristocracy) are the Sprinter van dirtbags. Often, a Sprintocrat hails from outside the Sea to Sky Corridor, piloting vehicles with license plates from such far-flung places as California or Colorado. In the sense then that Sprinter dirtbags are usually holidaymakers or professional athletes (and often both) they tend to “eat cake”, so to speak, while the lower-tier dirtbags (les paysans) must use wit and cunning in their search for daily bread.

One tier down, the dirtbag middle class constitutes the only working class amongst the dirtbags. Typically, they are “local” in the sense that Squamish, Whistler or Pemberton are the listed towns of residence on their driver’s licenses. In the eyes of many well-settled, land-owning locals however, the inherent kinesis of the dirtbag sleeping quarters means that the middle class dirtbag can only ever be considered “drifters” or “freeloaders” – terms that both come with a history of social and political baggage. 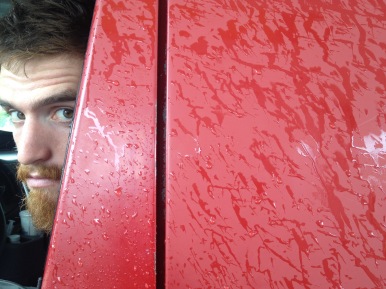 It’s a misnomer of course, as middle class dirtbags generally occupy all the lowest-paying positions in the modern industrial economy. Operating lifts, selling tickets, pouring drinks, manning checkouts and ferrying cartons of hamburger meat up and down scenic gondolas, the middle class dirtbag is the oxygen-transporting haemoglobin of the Sea to Sky service economy without which there would be no French fries and nobody to hate on.

To make matters worse, a working class dirtbag is also derided as a “granola” by the lower dirtbags stratums for his or her ability to financially access the more bourgeois of the cereal options. So, much like middle classes the world over, the granola dirtbag gets all the loathing that comes with privilege without actually being privileged.

The final class of dirtbag (the dirtbag in its purest form) is the species a naturalist might refer to as “homo dirtbag dirtbagius” but whom others might refer to as “the lowest of the low”. These are dirtbags in their natural state, lifers who typically reside beneath tarps and tents and if a car is even owned at all, it is rarely greater in size than a Honda Civic. Although usually male, they come from many different backgrounds – young, old, Ontarian, Quebecois, often Australian.

This lowest form of dirtbag, it must be said, does not work, but then as Orwell once quipped “what, indeed, is work?” The Sprintocrats work by uploading filtered images to the Instagram accounts of outdoor clothing companies, the granolas work by serving beers to hedge-fund managers with goggle tans and the true dirtbag woks by bin-diving for the curd gristle on a discarded plate of poutine or by hoovering up the remnants of a half-eaten sandwich in a day-lodge cafeteria – to keep away the bears of course.

Insofar as these bin-diving, pow-shredding, rock-scampering dirtbags are usually cognitively-functioning members of society, most are, at the very least, physically competent to commence work. This means that social mobility across the three dirtbag strata is fairly easy. The lowest dirtbag can become a granola simply by getting a job and the granola can become a member of the Sprinter-owning class, provided that he is happy to shoulder a lifetime of debt for an overpriced vehicle.

Thriftiness defines the dirtbag and so does mobility. He knows that twenty dollars of gas will get him from Squamish to Whistler and back in his beat-up gas-guzzler. But he also knows that he must factor in the very real possibility that his van might never restart when he makes for a tactical exit in the wintry pre-dawn from his illegal bivouac in the Lot 4 parking lot. Fringe-dwelling aside, he is a good enough fellow – grateful even of his mountain life.

Indeed, for the dirtbag, the mobility afforded by life in a car is better than paying somebody else’s mortgage. It gives one freedom of movement. Squamish in the summer, winter at Roger’s Pass and perhaps a trip to Indian Creek or Bella Coola in the shoulder seasons if he can skimp to together the gas money. 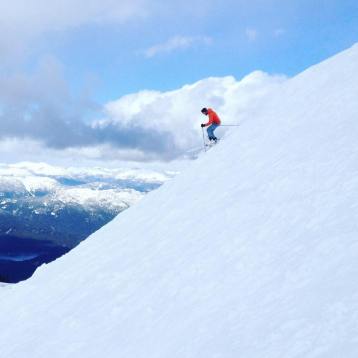 Certainly, there isn’t much incentive for the dirtbag to sedentarise in today’s housing market. With a detached single bedroom likely to cost the dirtbag one thousand two hundred dollars per month, renting a place in Squamish or Whistler, share house or not, may as well involve speculating in Texan cattle ranches. So, for many, the time spent dreaming about living in a home is better spent cross-checking the calorie content of a can of tuna.

With the reasons for dirt-bagging being wholly rational then, the only question that remains is “why is the dirtbag hated?” Well, no one really hates the dirtbag. “Hate” is a word best saved for that moment when the Vancouverites cruise into Creekside at 7’oclock in the morning on Opening Day and find not a single spot available. The parking lot is full of dirtbags. They’ve taken on the Goretex-clad pelage of the dirtbag in winter form – the “ski-bum”… and they’ve slept there overnight.

A working class dirtbag, on patrol

2 thoughts on “Down and Out in Squamish & Whistler”