In my car next to the trailhead, I switch on my headlamp and step out into the cold air. The night is dark but my tiny beam of light splits the heavy mist like a ship’s lantern through thick sea fog. In running tights and an ultra-lite shell, I am cold in the pre-dawn chill. For a moment, I consider throwing on another layer.

You should just get moving, I say to myself, because I know that when I’m moving I’ll become warmer. So that is what I do. By the time I’ve reached the first of the switchbacks I am warmer and I’ve found my stride. Below me, the creekbed boulders rumble, pushed along by a torrent of rushing snowmelt.

Rubble Creek. So no-named for the remnants of an ancient First Nations village that lies beneath. Sp’u7ets – meaning “boulders” – the Lil’wat people call this place. One day, a great rockslide washed it all away. Caused by the beating wings of the Thunderbird, they say.

My thoughts flit back to the trail. Planting the tips of my poles into the loamy ground – I move forward and upward. My pack is small – a daypack really with some water, a few energy gels, a down jacket and rain pants – although I’ve leashed a pair of snowshoes to the outside. It was a long, wet winter and there’s still a lot of snow up there.

At dawn I reach the lookout for the volcanic plug known as “the barrier”.

Behind that wall, I muse, lies Lake Garibaldi and a million years of pent-up energy. A natural dam created by a quick-cooling lava flow, geologists at UBC have assessed the barrier structure as “extremely unstable”. At its base, Rubble Creek flows from a breach in the moraine.

One day, the whole thing will go and Squamish will share the same fate as Sp’u7ets.

I keep moving. Half an hour later I’ve reached the lake-rim. An hour later, with snowshoes on now, I’ve passed Taylor Meadows and the snowline. The snow, though old and beginning to rot, crunches happily beneath my snowshoes.

Old White, my friend. It is good to see you again. I haven’t skied much this winter. “Obligations”. But now, here I am. By myself. Above it all. Escaped. At last.

In the distance, I catch a glimpse of Mount Garibaldi. Nch’kay – “muddy”. Garibaldi’s glacial névé forms the source of the muddy waters of the Cheekeye.  According to Squamish legend, during a time of great flooding, their ancestors sought sanctuary on the summit. Only on the highest peak in the area could they escape the Flood and the Mud.

Back in the post-diluvian era – in the world after the Flood – I keep moving. Then, I see it. My objective. The Black Tusk. T’k’t’ak mu’yin tl’a in7in’a’xe7en .  “Landing Place of the Thunderbird”. A jagged pinnacle of volcanic rock lancing into the sky. I remember climbing it a few summers ago. The feeling of the warm, cinder-rich rock beneath my hands – the mountain a pinnacle of debris – black and andesitic. Shattered, as though from the impact of some gigantic bird of prey.

As First Nations tell it, it was here where the Thunderbird landed to comfort the Flood’s survivors. He gave them food. He nurtured them – wrapping them in His wing.

It suddenly occurs to me that the apparent duality of the Thunderbird is important. Its wings can nurture or its can wings can flap. It can provide comfort or it can wreak havoc. A true creator-destroyer. Like the mountains themselves.

Starting up the approach slopes of the snow-covered Tusk, I look down at my watch. I see the numbers and suddenly, I stop. Six hours have lapsed since I left the car. Today is a work day for me – I’m moonlighting for a night shift tonight. I realise I’ve run out of time. A part of me of wants to push on – to sever ties with the world below. Ditch the clock. Forget my obligations. Linger in the sunshine. Keep in company with the snows. Escape entirely.

I mull over it. What would happen if I just stayed here?

But I can’t stay here. Our time in the mountains is only temporary – will always be temporary. The comfort the Thunderbird can provide only fleeting.  Sooner or later, we all must return to the Mud below.

Besides. The mountain – as they say – “isn’t going anywhere”. And I live here after all. The trailhead’s a twenty minute drive from my door step. I turn around. I make my way back down to Rubble Creek. 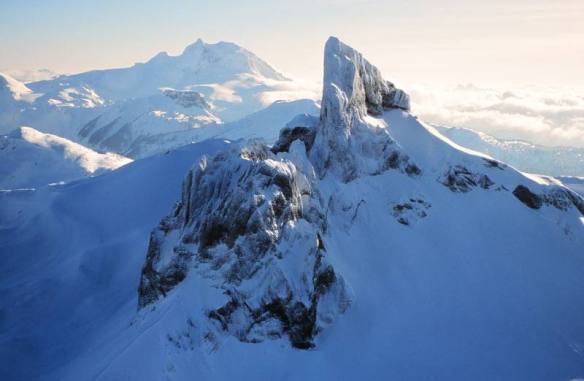