“The decline of Rome was the natural and inevitable effect of immoderate greatness. Prosperity ripened the principle of decay; the causes of destruction multiplied with the extent of conquest; and as soon as time or accident had removed the artificial supports, the stupendous fabric yielded to the pressure of its own weight… The victorious legions, who, in distant wars, acquired the vices of strangers and mercenaries, first oppressed the freedom of the republic, and afterwards violated the majesty of the purple… The story of its ruin is simple and obvious; and instead of inquiring why the Roman empire was destroyed, we should rather be surprised that it had subsisted so long.” – Edward Gibbon, The History of the Decline & Fall of the Roman Empire, 1776.

Much of recent domestic discourse in the US has focussed on the earmarking of Gina Haspel to run the CIA. A matter of some controversy, the debate has centred around the specifics of her role in the CIA’s infamous “enhanced interrogation techniques” program – the torture initiative which has since come to symbolize the dark early years of America’s war on Terror.

This was a well-covered story, and even though Haspel’s confirmation by the Senate ultimately went smoothly, the American public was right to examine her past with a critical eye.

Many would share the view that torture is legally unjustifiable and morally repugnant – a barbaric practice whose presence in Western society has been the subject of periodic extenteration in the writings of Voltaire; the wartime orders of Napoleon; and the big print of the UN Convention against Torture.

But while many of Haspel’s domestic critics – from John McCain to the editorial board of The Washington Post – argued that her murky past wasn’t a fit with their country’s basic values, perhaps Gina Haspel’s rise to the CIA’s directorship is precisely in keeping with the current trajectory of American moral drift – a drift she merely symbolises.

Take, for example, the White House’s May 7 pick for the next recipient of the Medal of Honor, the US military’s most prestigious decoration for valor. At a ceremony this Thursday, President Trump will award a Navy SEAL by the name of Britt Slabinski the highest award in the American military honors system for actions “above and beyond the call of duty”. 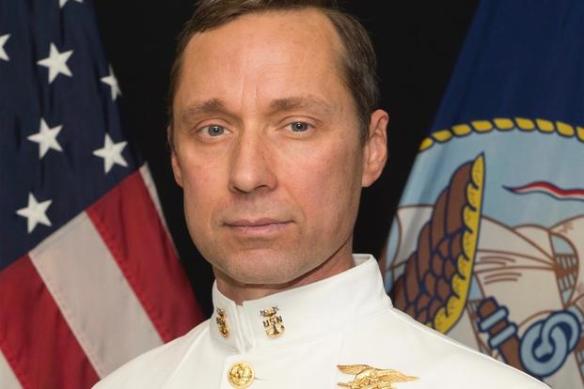 Such a lofty laurel is reward for a 2002 action that took place on an Afghan mountain called Takur Ghar. In the face of heavy fire, Slabinski single-handedly assaulted an enemy position in an attempt to rescue a wounded teammate – at great risk to his own safety.

This single act, in and of itself, might well be praiseworthy. But what is less well-known about Master Chief Petty Officer Britt Slabinski is his role as a central figure in a tradition of corpse mutilation that became the norm within the US Navy’s Special Warfare Development Group. To some, that last sentence might read as shocking and out-of-place – as if this graphic but factually neutral statement was some colossal new revelation. But all these details have been on the public record for a long time.

See for instance the interview Slabinski conducted with Newsweek journalist Malcolm Macpherson for his award-winning book Roberts Ridge. “Talking about funny stuff that we did,” Slabinski described of coming upon the corpse of an Al-Qaeda fighter on an Afghan hilltop known as Objective Wolverine. “There was this guy whose feet were sticking out of some little rut. He was dead but, you know, people got nerves so I shot him about twenty times in the legs… Every time you’d shoot him he would kick up and you could see his body twitching. It was like a game. It was good therapy.”

Article 18 of the Geneva Convention states that soldiers presiding over the dead must “take all possible measures… to prevent their being despoiled” but according to SEAL team leaders interviewed by The Intercept reporter Matthew Cole in findings published last year, such desecrations were widespread – even going beyond riddling corpses with bullets. Skinnings were frequently carried out, ostensibly to collect DNA evidence. In one infamous incident, one of Slabinski’s operational orders to bring him “a head on a platter” was interpreted as more-than-rhetorical, resulting in one of his subordinates decapitating a dead enemy fighter during a raid in Helmand province.

Unsavoury allegations about Slabinski’s teams extended to live targets as well. In 2015, the New York Times reported complaints about civilian casualties from Afghans at the site of a Slabinski-led raid. When the US Navy’s chain-of-command requested comment from Slabinski about an order he had allegedly given to “kill all the males” he did not deny the claim.

Under normal circumstances, such allegations levelled at the feet of somebody who is to receive the Medal of Honor on Thursday would usually draw attention. But few in the US seem to know. Fewer seem to be concerned. Given that all this information was on the public record while the medal approval process was taking place one might conclude that there is a problem here.

It certainly doesn’t require any kind of boldness to offer that there is something wrong with a political system that would allow the subject of ongoing, credible war crimes allegations to receive that country’s highest decoration for bravery.

Indeed, one way to assess the bill of health (shall we say, the constitution) of a society is to examine the personalities of those chosen to occupy positions of high status. Gina Haspel as CIA Director. Britt Slabinski as Medal of Honor recipient. Donald Trump as President of the United States.

The presenting signs seem to belie an illness – a necrotic rot – not a system in stasis.

Perhaps then, when Trump’s critics in America’s technocratic classes perceive the President as the cause of their country’s problems their political sphygmomanometers are giving a bad read-out. Perhaps Donald Trump is not the problem at all. Perhaps he’s but a symptom. A symptom of America’s moral drift.