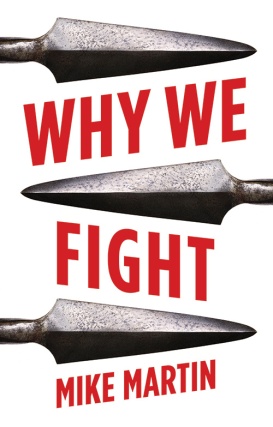 Scholarly attempts to understand aggression in homo sapiens are probably as old as the human sciences themselves. From the labors of IR scholars studying interstate conflict at the level of whole political systems, to micro-level examinations of the psychological structures that impel individuals towards violence, the existing literature on the subject is fatiguing even to summarize. The story of Cain the farmer and Abel the herdsman can convincingly be read as a retelling of a land war between agriculturalists and pastoralists at the dawn of civilization. Later, in ancient Greece, Thucydides surmised that the Peloponnesian Wars were explicable by three thematic motives: fear, honor, and interest. Looking inwardly, Sigmund Freud imagined aggression as a death instinct which arose in direct opposition to the creative, life-producing drive exemplified by sex.

Continuing unto the present, others, from Konrad Lorenz, with On Aggression, to Azar Gat, with War in Human Civilization, have also tried to answer the fundamental question – why do humans set out, purposefully, to kill each other? In the same scholarly tradition is Mike Martin’s Why We Fight. From the outset, and writing as a war studies scholar with expertise in biology and social psychology, Martin’s thesis is bold and clear. “Status and belonging are the two main drivers of human conflict,” he contends – a claim evidenced by examining the neurological and evolutionary impulses that steer all homo sapiens in analogous directions.

Central to the study of violence, Martin argues, should be a mutual agreement that humans, as animals, are subject to the fundamental laws of natural selection – a biological fact that frames his status-and-belonging model. In then rejecting “group selection” – a Darwinian theory which posits that evolution can also occur at the level of the group – Martin adopts the gene-centred view of evolution, whereby selfish genes are replicated across generations by the vehicle of status-seeking individuals.

An organism’s primary prerogative, Martin argues, is to propagate its genetic material. This means that in a state of natural competition, humans will seek first to maximize two important quantities: status (which helps one to secure mates and resources) and belonging (which helps one to form war coalitions in order to stave off the violent ambitions of aggressors). At a neurochemical level, Martin asserts, status and belonging are underpinned by the release of two hormones – testosterone, the hormone which spurs intraspecific competition and hierarchy-climbing; and oxytocin, the bonding hormone which strengthens in-group impulses and generates hostility towards out-groups.

In also examining wartime self-sacrifice, Martin argues that combat altruism in early hunter-gatherer bands originally evolved because of “inclusive fitness” – the notion that genetically-related kin were included, consciously or otherwise, into an individual organism’s survival calculus. By this reasoning, a warrior should be willing to die for two brothers or eight cousins because kin persistence would guarantee his genes’ survival. As societies then grew larger, the kin identification-and-preferencing mechanism came to apply to non-kin such that modern soldierly “bands of brothers” now resemble “imagined” or “fictive kin.” In-group-out-group divisions meanwhile, continue to cause wars, while the risk of dying in battle is seen, in biological terms, as a soldier’s membership price for belonging to the group.

Implicitly, the group is understood here as a mere marriage of convenience for the individual’s genes – an obstinate rejection of the group selectionist view, which would see self-sacrificial war service as a group-level survival adaptation. As a neurological, psychosocial and genetic account of warlike behaviour from the perspective of the individual, Martin’s thesis is comprehensive – intuitively sound, tested empirically, and with anecdotes from his own experiences serving in the British Army on operations in Afghanistan. Moreover, his distilment of individual motivations for fighting down to “status” and “belonging” is nigh-on as good as we can ask for with currently-available research.

Full disclosure though… Mike Martin is currently co-supervising my doctoral studies at King’s College London. As such, and to put his theory into practice for a moment, there are both “status and belonging” considerations at play here which, all things being equal, will probably influence how I review Why We Fight. Having said that, it might surprise the reader to learn that although I see Martin’s book as an important addition to the sociobiological study of conflict, he and I furiously disagree on the role played by group selection (and by extension, ideology) in how and why conflict occurs.

Indeed, where Martin’s grappling with human aggression seems most inadequate is in his discussion of the role of ideology – here defined as the normative beliefs and values which adhere groups and which individuals within the group are socialized into holding as self-evident.

We know, of course, that ideology can be a potent shaper of behaviour in wartime. It was bushido which drove Japanese kamikazes to fly aircraft into Allied ships during the Second World War. It was the mere thought of having dishonoured the Führer which drove Hans Langsdorff, captain of the pocket battleship Graf Spee, to shoot himself after defeat at the battle of the River Plate. It is the utopian phantasm of a global “caliphate” which inspires a jihadist suicide bomber to blow himself up at a roadside checkpoint. And it is the esprit de corps – the spirit of the [group] body – generated by recruit training at Parris Island which, over the years, has propelled more than one US Marine to dive on a grenade for his friends.

When influenced by deeply-embedded ideological structures, humans in the midst of fighting frequently put aside their own interests for those of the group. This seems obvious. Such frameworks of “moral sense,” as Darwin described them, can be weaponized to ensure that individual organisms are willing to serve the group, even to the detriment of genetic longevity. This is group selection at work. If not, then how could it be better or more parsimoniously explained?

The short answer is that most bona fide cases of combat altruism which result in the death of the individual probably cannot be explained in terms of individual, kin or “fictive kin” selection because when one’s comrades are not one’s relatives, there is no genetic advantage selecting in favour of self-sacrifice.

This applies especially to expeditionary wars, where the violence threshold is well below that of total war – i.e., where the survival benefit for one’s family back home is negligible. In these instances, social norms override the organism’s in-built gene propagation drive. Thus, the group and not the individual is the vehicle by which natural selection occurs. Although Martin’s individualist rationale probably holds true for many or even most explanations of conflict, the existence and persistence of combat altruism presents a puzzling outlier, as the earlier examples show. This is where recent research in the domain of “multilevel selection” – which posits that clusters of organisms can sometimes behave like a “superorganism” and that the process of natural selection can “toggle” between individuals and groups – might fill the gaps left by Martin. Individually-disadvantageous, group-advantageous behaviours among non-genetically-related kin are observed across the animal kingdom – from parasites living in the stomachs of cattle, to leaf-cutter ants, through to forest chimpanzees, and finally, to humans.

As such, and although Martin’s well-articulated status and belonging theory may explain many things about the ethological history of conflict in homo sapiens (and animalia, more broadly) the significant exceptions to the rule where altruistic ‘groupishness’ does exist requires more serious consideration. ‘Zooming out’ from the individual allows us to look in on the system-as-whole – allotting for holism and curiously, given the scale, greater detail. The question of ‘why we fight,’ it appears, will never be answered until we learn to see a war-band of humans, not just as a collection of individuals, but also as an occasional functional collective.