It was a gargoyle, this hanging sculpture of ice. And it was smiling at me. A dripping white hollow for a jaw. A long tendril of frozen water hanging down to form a devilled nose. Like the stone statues standing watch over Notre Dame, this gargolie had positioned itself on the highest ramparts of the climb – a grinning guardian of the chute, frozen in time, daring me to make a mis-swing. I swung my axe into the centre of its forehead and pulled up, stabbing my crampons a little higher in the ice. There. A better foothold. I could almost see over the top of the vertical section now. Again, I swung my axe and watched it sink to the neck.

One last swing and I was over the bulge. Peeking over the ledge, I saw Jordy at the belay. Tied off to a thick pine tree, he was grinning. Pierre “Jordy” Jordache is fifty-two years old and still climbing hard – still belaying off a figure-eight device. Apparently people still use them. “Tabernack aye!” he shouts down to me. “The ice is fucking hard!” I nod and shake out. “Tabernack” was the right word here.

A rendering of “tabernacle”, it’s used by the Quebecois as we use “damn”. Taboo words in French Canada relate to items in the church, an amusing linguistic peculiarity which associates everything that is fucking goddamn bullshit about the world with religious iconography. Words like “osti” (“holy host”), “câlice” (“chalice” and the feminine symbology that goes with it) and “calvaire” (as in, where Jesus died) are how you swear in my Dad’s home province.

At times, the ice below had been harder than a stone tabernacle – cold, dense and reactive – so there was more than a little truth in Jordy’s description.

I was approaching the top of an ice route called “Geuele de Requin” (“The Shark’s Maw”), a broad chute (waterfall) spilling down the mountain-side above the pine forests and remote townships of Quebec’s Gaspé peninsula. The standard route was dripping wet so Jordy had chosen to lead the longer, steeper and harder variant – a line of 5+ ice which wound its way past the left side of the eponymous Shark’s jaw. The bottom of the route had been crampon-breakingly hard and the top section had been transformed into a delicate stack of frozen gargoyle heads leering at us as we climbed. It was a good challenge in the vertical and a great introductory route to the area. 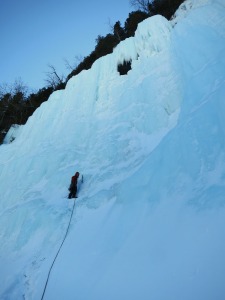 I’d climbed with Jordy at the local ice crags around Montréal this winter and when he suggested escaping for La Gaspésie, I jumped at the opportunity to learn a little more about the local climbing scene. We’d both taken a week off from not much else to come out here, and in thwacking a pair of ice tools up a frozen waterfall I was finally starting to gauge what this quirky little province in the far east of North America was all about.

The autoroute between Québec City and Rivière-du-Loup follows the south bank of the St Laurent River as it turns into the Gulf of St Laurent and thence into the North Atlantic. We drive with the heater on full blast, stripped down to our long-johns and t-shirts. Even though it is hot inside we know that outside it is not hot because the road is flanked by fields of white. Winter winds blow snow in biting draughts across the road.

In summer these are the arable lands of Eastern Quebec, the fertile belt of Canada’s only completely French province. Silos of grain dot the landscape either side, towering over the highway like lone guardians of an agrarian French uniqueness.

Half an hour west of Rivière-du-Loup, Jordy points out a stubborn line of cliffs, rising up from out of the frozen banks of the St Laurent. “That mont over there,” he says as we drive. “That belongs to this old guy. He used to be in the military. They call him ‘The Major’. He’s a climber but he hates other climbers coming onto his property. We used to have one friend that lived nearby. Every time the Major went away he’d give us a call and we’d go there and climb all the routes.” Jordy is an illustration-in-profile of what lies at the core of the climbing tradition – rebellion. Rules are to be ignored, la sûreté to be defied, ice to be led, and “the top-ropers” to be mocked. Everyone likes a rebel. I’m sure it must be in our species’ DNA.

Jordy is as Quebecois as they come but though we write our emails in French we speak in English because he’s a man of the world – an example of “the Canadien errant” – often abroad. Spending half the year working as a rigger for circus and sporting acts like Cirque du Soleil or the Sochi Olympics he’s also that rare breed of climber who works all summer so he can climb all winter. He’s been up Ama Dablam, dabbled on the 6+ monsters in the Rockies and sewed a portaledge together for an El Cap solo, but it is in the long Québec winter that he is truly at home as a climber. He’s got winter projects all over the East – a true convert to the cult of ice.

Now, with my forearms pumping, I’m following him up another one of his projects. After some recent expeditions through the Middle East and North Africa, I didn’t feel any pressing need to climb hard and lead at my limit. I just wanted to go climbing. I was happy to just bumble along behind.

I reach him at the belay of the Shark and an hour later we are back at the base of the route, bags packed staring up at the thing we’d just climbed. In the late afternoon sun it looks delicate – “mince” as Jordy describes it. The jaws are less a menacing row of teeth and more a delicate chandelier of hanging icicles.

We drive back along the coastal road with rolling, pine-clad hills on our left and an arctic marine landscape on our right. I look across the St Lawrence to the opposite coast, barely perceptible on the horizon. “La banquise” – the ice pack frozen to the shore – is starting to break up. The cold today is mild – spring is in the air. The setting sun is an orange-pink and the sky around it is peach. The colour of the banquise changes from blinding white to a sullen icy blue. In the dying light, the pools of water between the floating bergs gleam the colour of molten gold.

Rapt with the ocean and the light, I could look at nothing else. But Jordy – Jordy looked out his driver’s side window staring up at the lines, transfixed by the steep pillars of ice flowing fat from the edge of the cliffs above. At times behind the wheel, he slows and swerves erratically, head and eyes trained on lines instead of the road.

Yep, a convert to the ice cult.

We return to Ste Anne-des-Monts, the sleepy, sea-side town, where we spend our evenings, as the last light of day fades to dark. The town names in Quebec, like the swear words, are exuding with religiosity as well – an interesting mix of combining the puritanism of naming a town after a saint with the irreverence that is culturally Quebecois. With names like St-Marc-des-Carrières (St Marc of the Quarries) or St-Louis-du-Ha!-Ha!, these towns become more memorable than they otherwise would be.

We sleep in an old elementary school that’s been converted into an auberge. Except for the hotelier, the place is empty and cold – a cross between Shackleton’s South and The Shining. The next day, we turn our attentions to road-side attractions – the ice lines that had transfixed Jordy on the drive home. The names of the routes around here are as poetic as one would expect of French-speaking climbers scaling ice cliffs by the sea… Le Voile de la Mariée (The Bride’s Veil, Wi3+), Les Cavaliers du Vent (The Knights of the Wind, Wi4+), Méduse (with Gorgon-like tentacles of ice to match, Wi5), La Corneille (The spooky-looking “Crow”, Wi5), Le Méchant Loup (The Wicked or “Big Bad” Wolf, Wi4+) and Guy Lacelle’s testpiece L’Épée du Jade (The Jade Sword, Wi6+).

Of course, even though Jordy calls all these routes “projects”, he’s been climbing here for twenty years and has climbed most of them three, sometimes four times already. But as he leads away up an impossibly-blue pillar of ice, whooping for joy with every stick of his tools, shouting down that “this might be the best route I’ve climbed all season”, I realise that he’s one of those climbers that is having the best time of his life every time he ties into a rope. After he’s disappeared from sight and I hear the muffled shout of “assuré”, the rope goes taut and I follow him up the frozen blue column. The route is called La Cigarette Bleue (4+), and in keeping with the spirit of the nicotine deathstick for which it is named, I am god-damn addicted to the brutish meditation of this sport. The days go by and we climb relentlessly. Scrub-bash, route-find, post-hole, plugging steps across loaded slopes – ice tools whacking, crampons crunching.

It’s the last day. Last day, last climb. I know that I should lead something before we leave. I’ve been lazy and it’s time to apply myself again. I settle on a run up La Cigarette again, not least because it’s the most aesthetically-pleasing line in the area and not least because it’s right next to the road.

The car pulls to a halt next to the line and we step out into the wind, pulling our hoods down low over our eyes. With the pillar of frozen blue water before us, we walk toward it like priests in procession. Our boots leave the highway tarmac – the world of Man, the world of the Profane – and our legs take us through the snow towards the Sacred. We’re here now, at our place of worship.

A famous, dead mountaineer once wrote that “mountains are not stadiums where I satisfy my ambition to achieve, they are the cathedrals where I practice my religion”. Spot on, Anatoli.

Here on this single-pitch roadside ice climb by the sea I was far from any Himalayan behemoth he might have called a mountain. But the act of worship was the same. To climb was to worship, to venerate, to be in awe – to stand before the tabernacle and bow before it, all the bullshit, all the suffering, all the tabernack notwithstanding.

I, in awe of this sheet of blue ice, upon which I hung from two little carbon picks and a set of boot-mounted aluminium spikes. As I plunged my picks into a runnel the colour of stamped sapphire, I wondered if it was wrong to deface this sculpture with ice tools. But with tomorrow’s melt and freeze, the hook marks would be gone. And one day soon, in but a few short weeks, the whole chute would be gone. With it, all traces that we had ever been there.

I reach the top and call out for Jordy to start climbing. He meets me at the belay and sheathes his tools. “That was awesome!” he says, as if for the first time. On rappel, I gaze out across the water. The wind blows hard against the cliffs and the sea is rough. The spring weather is here and the banquise are breaking up. It is no longer la banquise, hard and frozen. It is now a fleet of ice bergs. On their way out into the Atlantic to menace the English-Canadian fisherman setting sail from Newfoundland. From Quebec avec l’amour. Everything was as it should be. 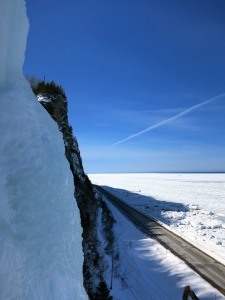 Ice climbing by the sea…