The following appeared in the Sydney Morning Herald.

This month marks the 50th anniversary of an event in history the Vietnamese people call Tham sat Mỹ Lai – the Mỹ Lai Massacre. Unmatched as the most appalling episode of America’s campaign in Vietnam, the incident at Mỹ Lai was so visceral and so objectively abhorrent as to have a permanent impact on the ultimate perception of the war. The name “Mỹ Lai” itself has become practically synonymous with the “war crimes” concept.

In total, as many as 500 men, women and children were murdered on March 16, 1968 – the final outcome of a clearance operation conducted by the US Army inside a so-called “free fire zone” in South Vietnam.

Immediately afterwards, Captain Ernest Medina, the commanding officer of the company responsible for the killings was issued a Letter of Commendation and General William Westmoreland, the overseer of the entire war, personally congratulated the unit for an “outstanding job”. A “heavy blow” had been “dealt” against the enemy, the dispatches initially claimed.

When all was said and done though and the truth about Mỹ Lai was finally revealed, Second Lieutenant William Calley, a junior-level officer present at the scene, was charged and convicted with 22 counts of pre-meditated murder. He was the only officer to serve time for offences related to the massacre.

Although some Vietnam veterans like Colonel David Hackworth have asserted that there were literally “hundreds of Mỹ Lais” over the course of an almost 20 year military engagement in Southeast Asia, Mỹ Lai retains a particularly important place in the imaginarium of this period – in part because of the sheer scale of the slaughter and in part because of its effect on public opinion at a time when opposition against the war was becoming increasingly vociferous. 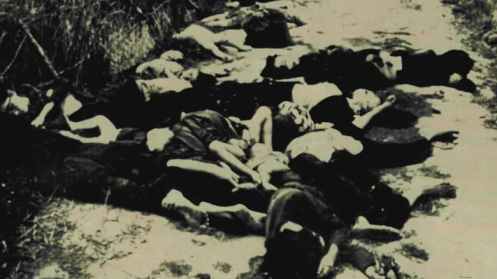 Images of the massacre taken by US Army photographer Ronald Haeberle. Immediately after the killings, Haeberle destroyed some of the evidence. Photo: AP

The somewhat sensational revelation of the killings and the subsequent highly publicised trial of Calley also raised important questions about the issue of responsibility in a war crimes situation.
How did such a thing as Mỹ Lai occur? Who participated in it? And perhaps more importantly, who ordered it and/or allowed it to happen?

One view, the “wrath of the centurions” view, asserts that the greatest culpability lies with the leaders at the small-unit level – the bottom-level links in the so-called “kill chain”. By this reading, the low-ranking “centurions” who directly oversee the killings – the “strategic corporals” and the Second Lieutenant William Calleys who are physically present when atrocities occur – are primarily responsible when clusters of army privates gang-rape, mutilate and murder civilians as the US GIs did at Mỹ Lai.

As military psychologist Lieutenant Colonel Dave Grossman argues in On Killing, “the proximity [emphasis added] of the obedience-demanding authority figure” is the most important factor in enabling killing behaviour, especially when the killing occurs under morally questionable circumstances.

The opposing view is that incidents like Mỹ Lai reflect a broader cultural problem within a military force – that the very creation of so-called “free fire zones” in Vietnam demonstrated an indifference to and perhaps even a disdain for the act of separating innocent civilians from lawful combatants.

When William Calley was convicted for his role in the killings, Brigadier-General Telford Taylor, who had served as a senior American prosecutor at the Nuremberg Trials, asserted that the US military had done a great injustice with its failure to lay charges against any higher ranking officers.

Following this logic, the broader strategic emphasis on attrition and the Pentagon’s obsession with body counts and “kill ratios” was as much a part of the problem as the “centurion” on the ground marking a child for death.

Observe, for example, Calley describing Captain Medina’s orders during his trial: “I was ordered to go in there and destroy the enemy … I did not sit down and think in terms of men, women and children. They were all classified as the same, and that’s the classification that we dealt with over there, just as the enemy”.

Of course, just as the Nuremberg trials established the principle of “command responsibility”, Calley’s excuse that he was only following orders, was just as comprehensively shot down during Telford’s prosecution of the Nazis. The SS man guarding the door to the gas chamber was just as culpable as Himmler or Hitler.

But perhaps it is also true, as General Walter Boomer, Assistant Commandant of the Marine Corps, succinctly put it: “My Lai happened because officers failed.”

Irrespective of where the blame for atrocities like Mỹ Lai should lie – be it with the grunts, with their “centurions” or with their high-ranking overseers – the Vietnam war, we now know, ultimately became a lost cause. And perhaps it already was a lost cause, even before the soldiers of Charlie Company, 1st Battalion, 20th Infantry Regiment began the initial sweep into the My Lai hamlet cluster.

Increasingly, as we have seen more recently in Iraq and Afghanistan, savage “wars among the people” are simply not viable. As “forever wars” like Vietnam drag on, infantrymen will fatigue, the “Other” will be dehumanised and the lines between enemy and civilian will be blurred by a miasma of relentless combat. Maybe under these circumstances, incidents like My Lai are inevitable – a sobering realisation.

Ultimately then, perhaps final responsibility for the events of March 16, 1968 lies with the American public for allowing the unwinnable war in Vietnam to carry on as long as it did.

2 thoughts on “Mỹ Lai: What we learnt about ‘forever wars’ from one of America’s worst atrocities”